Appearance is the same for both models. Suggested Retail is $550.

Try one yourself and see why the best players won’t part with their Stinger.

A Review of the All-in-One Stinger by Inside Pool Magazine, December 2006.

Click on photos for larger pictures and more information. 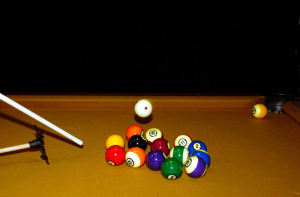 When you can’t reach… bridge-jump! 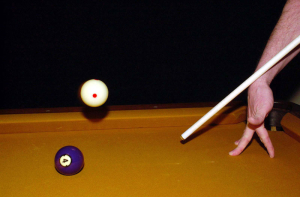 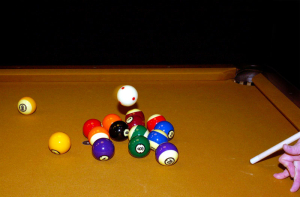 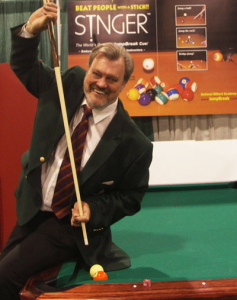 2005 Hall of Fame Inductee Mike Massey shows off his Stinger 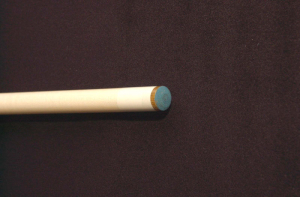 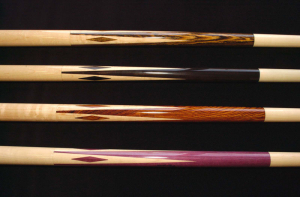 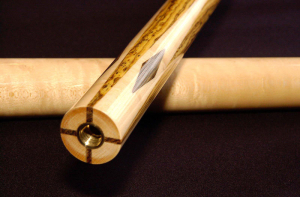 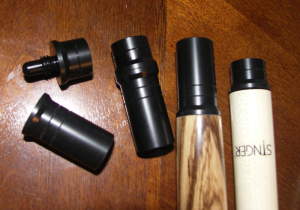 Stinger breaks down into 3 pieces

The BCAPL (BCA Pool League) is no longer allowing phenolic tips in BCA league play. In preparation for this possibility, we have been developing and testing leather formulations for several years. Our “Godzilla leather” tip is now available on Stinger cues. It meets the BCA requirements, and jumps & breaks better than any other leather we’ve tested. It works nearly as well as our phenolic formulation. Stingers may now be ordered with either tip, or ship us your Stinger shaft and we’ll change the tip for $45, including return shipping.

The All-in-One model Stinger has been officially approved for use in the APA (American Poolplayer Association league). It is approved for use as a playing cue and as a break cue. Players may also shoot jump shots with the All-in-One Stinger. Fortunately, the full-length All-in-One cue jumps better than “normal” playing cues, as in APA it is illegal to break down to the short length. Good news for APA players. One cue does everything, and it’s legal!

After 5 years of rave reviews of the Stinger, we’ve found a way to raise its performance to yet another level. Through an extension of our proprietary patented Stinger tip/ferrule technology, we have raised the bar again. All 2008 Stingers feature this upgrade. Look for an SS symbol on the shaft along with the Stinger logo. Pricing is unchanged.

Pros using the Stinger include:

“I used to have a Predator BK. I love the way the Stinger breaks, but I really love how easily the jump cue works. I also like how much lighter my case is with one less cue in it.” – Jennifer, AZBilliards Forum, 4/20/2005

“The Stinger Jump/Break should come in a box that says {For ages 4 and up} because that is how easy it is to use. It is such a great jump cue that I have to question my knowledge of physics since I just can’t understand how it allows me to jump so easily. I’m pocketing more balls on the break and it’s tougher for an opponent to play me safe. By far the best jump/break cue I’ve ever had.” – Chris 7/8/2005 (UPA Touring Pro, House Pro – Amsterdam Billiards, NYC)

“I need a really good break/jump cue for the IPT. I’ve found it in the Stinger. It gives me maximum velocity on the break and accuracy on jump shots. I can’t wait to try this new product in the heat of battle.” – Grady 3/8/2006

“Everyone looks for an advantage. This cue is it. The break is so important and this cue allows great control as well as an added power I’ve never found in any other cue. But that’s just half of the equation; use the quick release and now anybody – and I do mean anybody – can jump out of trouble. I encourage everyone to give it a try. You’ll wonder why you waited so long.” – Randy 7/7/2005 (UPA Touring Pro)

“I screamed with delight when my Stinger came through the post – and it hasn’t disappointed. Not only does it give me a break – which was pathetic pre-Stinger –  but it’s beautiful to look at too! I absolutely love it! ” – Lynette 8/9/2005 (World ranked #1 Ladies Snooker Champion, European 8-Ball Pool Champion)

“Every time I pull the Stinger out of my case, all the cueballs in the vicinity start quivering.” – Randy 11/22/2004 (BCA Master Instructor, National Champion)

Click here to view or print the Stinger brochure.